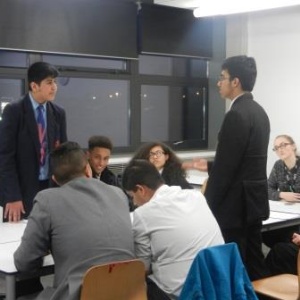 The West London Debating League is a growing initiative that has come out of the lack of opportunities for KS4 students at state schools to engage in competitive debating.

UHS entered four teams, all of whom performed exceptionally well on the night. Mr Weinberg, English teacher, said: “It’s been fantastic to see the students developing as confident speakers and critical thinkers over the course of this year. They have improved remarkably and tonight they demonstrated great skill and even greater potential for future competitions”.

Standout performances on the night came from Iqra Mohammed and Annabelle Swaby, who won both of their debates. Catriona and Amelia Bowman also came first in their pre-prepared debate and the two teams of boys competed admirably, to secure second places against tough opposition from Langley Academy.

The evening was a huge success and a testament to the ability of our young people to articulate mature and perceptive opinions on controversial topics. All UHS teams will be going into the fourth round, to be hosted by Cardinal Wiseman School next month, with eager anticipation.